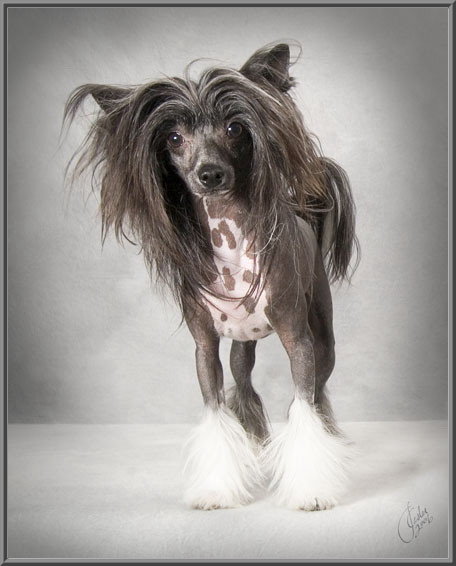 Steel came here in August 2009 at the age of nearly 5 years. It was planned to have him only for one year for shows and a mating. When it came to arrange his return I was told that he would be neutered and placed. I did not want this sweet dog to go through something like this as I was already his fourth place. So Steel stayed here.

He did not trust anyone but me. From the first day we had a bond which is undescribable. And same counts for his unconditional love and gratitude which he gave me each and every day. As if he was feeling that the passing him around and about was finally over ......

Steel was only shown a few times in Europe, in the judges opions he was too small. One litter out of him was born here, 2 pp males, 2 thl females and 2 pp females. Both the males did not find adequate homes and stayed here.

At the age of nearly 10 years Steel had a hip luxation caused by an accident, he had a surgery done and even shortly afterwards nothing was seen and nobody would have believed that his femur head had been removed.

Steel was a great play mate for his kids, and he also got along with all in the pack excellently. A dream! When he turned older, in summer he loved to lay down somewhere in the shade and watch the other ones. In winter his favorite places were the couch or a big cosy dog bed. Of course he was in the bed during the nights.

Totally unexpected and without having ever been sick on July 9, 2018, Steel went over the Rainbow Bridge at the age of 13,5 years. It was a shock, even more since I had already lost three darlings since end of January. On July 19, he was cremated and on July 31, I brought his urn home where he is now among the others in the memorial corner in the bedroom to be always with me. When I am travelling a little pendant with his ashes is hanging on the rear view mirror in my car.

Losing him leaves a big hole in my heart, only the memories of nearly 9 wonderful years with this sweet boy let me go on.

Thank you Steel that you have given me so much love and your trust. You were an enrichment for my life and of course you have your own place in my heart and will forever be unforgotten ...... until we meet again one day.