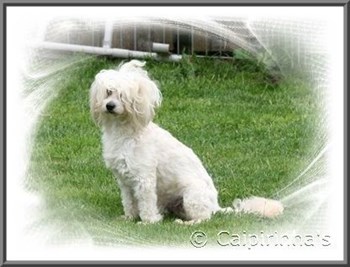 Marvin was out of the first Chinese Crested litter in this kennel. As nobody was interested in him he stayed with us. He was always a happy, vivacious and highly amicable playmate for all other dogs here - big and small. Shows have not been visited with him, and therefore he always had a short hair cut for reasons of easy grooming. To  take no risk of an unwanted breeding of one of our females we had Marvin neutered.

Never ever we would have thought that this sweet and always healthy boy will leave us at the age of not even 7 years. He is missed - like all the others which have already gon over the Rainbow Bridge. Comfort is the fact that during his few years he could always spend a life full of joy and energy.